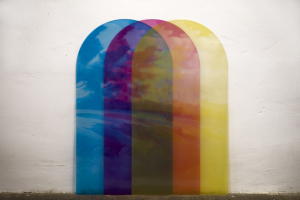 “Three channels (Trompe l’oeil) originates from the attempt to convey a credible vision of reality through the partition of an image into three channels (RGB), - said the artist – a techique which is typical of many digital image processing softwares.

My work consists of three plexiglass panels, that show the same print reproduced into three channels (one for each panel). The original idea of the print comes from the image of a trompe l’oeil taken from the internet, from which I selected only a detail. This detail was painted and then photographed, and finally it was translated by computer into three chromatic predominants. Thus, the art of painting establishes a slow, tormented, but fruitful relationship with digital printing, which in turn presents itself as a declaration of lightness, a portable trompe l’oeil.

This connection between painting and digital printing engenders a broader kinship with the concept of mimesis, since the art of painting wants to imitate computer technology while the computer tries to imitate reality.

I have chosen a trompe l’oeil as the main subject of my artwork due to a presumption of verisimilitude, made analytical and illusionistic at the same time by the chromatic partition.

This method highlights the hypermediaton which lies behind each process of image selection and image reproduction, so as to require the eye more time to spend on the examination of the artwork in order to unveil all its meanings.”

He attended the Albertina Academy of Fine Arts, Torino.

Sofia Mitsola (Greece, 1992) is the winner of the audience award. Thanks to the 12.997 friends who voted in the past days.

We are happy to announce that the third edition of the Frase Got Talent Prize has been opened.

The competition is open to artists of all nationalities born in and after 1989.