frase contemporary art is proud to announce that the winner of the 4th Frase Got Talent Prize, “Back to reality”, is the Italian Artist Alice Faloretti (1992) with the work “Twilight”. 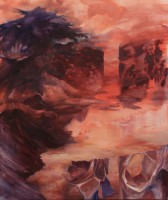 “The painting "Twilight" talks about some stories and sensations caught from my daily life, episodes, memories, lived or never known, that converge into a different plans of reality, through illusion, surreal visions, flowing like thoughts and unpredictable connections.

The point of view in this case comes from a window. I research the poetic side of the ordinary, I de-contextualise and transform concrete images into mental, mysterious and illusory spaces, in which figurative elements blend with more indefinite ones. I aim to imagine worlds where nothing is as it seems and establish a sense of immersion inside that apparent flat surface. Surface could be either a monitor, or a window, where we can enter or stay outside.

The virtual augmented reality "surrounds" us with all its music, lights, videos and images in movement; in a kind of sense imposes itself to us, driving us towards a predetermined interpretation where we have only to stay and follow. On the other hand, painting doesn't impose itself on the viewer, it remains with its whole world fixed, waiting. It can give itself totally only if an outward presence establishes a dialogue, but this type of interaction requires an effort, imagination and desire. We have to physically move toward another physic object.

This meeting needs bodies, intimacy, closeness, exchange. It is an open place overlooking on space and time, on past and future, where we can pour our personal and collective dimension. The sense is inside painting and us together, it exists in that "augmented relation".”

She attended the Academy of fine arts of Venice.

A special mention was given to Adelisa Selimbasic (Karlsruhe (D), 1996). Her painting will be the cover of the catalogue. 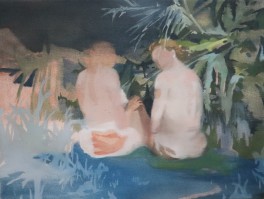 We are happy to announce that the fourth edition of the Frase Got Talent Prize has been opened.

The competition is open to all artists aged 30 or younger from anywhere in the world, working in any medium.

Text of the call
BACK TO REALITY _ BANDO.pdf
Documento Adobe Acrobat [739.5 KB]